A History of the Folk Dance Movement in California

by Larry Getchell
CHAPTER 1: THE BEGINNING On a foggy evening in February, 1938, three couples, including Song Chang and his new bride, Harriet, met at Bryl Wyneck's studio in the Montgomery block, Washington Street near Montgomery They were to enjoy with Song Chang a new style of dance that would encompass, in just a few years, as many as 400 folk dance clubs in the State of California. Such a phenomenon was the last thing on the minds of this small group as Song taught them plain Schottische, Norwegian Mt. March, Ace of Diamonds and some waltzes. In a 1944 "Let's Dance" Song Chang wrote an article titled, "International Folk Dancing in the West" in which he makes only short reference to that first meeting, mentioning names and simply remarking that the number of dances he present were quite an order for the first night. In our search for more detailed information on the first meeting including names that were possible, found a short history in the April, 1948 "Let's Dance" written by Robert Lamont, under the heading, "TEN YEARS WlTH CHANGS." From Bob's article, there is no clue to determine if he actually interviewed Song Chang but it states with authority names, dates and places. According to Robert Lamont, three couples met with Song Chang and his wife, Harriet, at the Washington Street address, that foggy night in February, 1938. He further states that on this first night a coppersmith, a Chinese American and his Scandinavian bride, a commercial sandblaster, a puppeteer and several artists gathered at the studio on Washington Street. He then identified these various individuals is on Harry Dixon, Song Chang and his wife, Harriet, Stillman Clark, John McCarthy, Bryl Wyneck and a few others. Possibly the names mentioned by Bob could add up to three couples, including Song Chang and Harriet, but in any event the numbers are close. Following the first meeting or so, which we assume took place on a weekly basis, others did join, including one in particular, Grace (Churcher) Perryman. Why did Song Chang become interested in these dances of various nations? Here we must make sure fiction does not interfere with fact. Referring back to Robert Lamont's article, Song Chang's interest in folk dancing dated back to 1931. While touring Europe he was impressed with the warm feeling of camaraderie, the disdain for racial barriers and the fun spirit, all too rare in those depression-swamped days. The seed for future action was planted. Returning to San Francisco, Song visited "Mama Gravandar's School of Swedish Applied Arts," 2020 Pacific Avenue. Here, once a week, after showing their art objects visitors were invited to join them in the basement for an evening of Swedish dancing. During this time, Song and Harriet promptly taught folk dances to polyglot mixture of people of different races, seemed proof he was on the right track. The honeymoon over, Song and Harriet promptly rounded the folk that met at Bryl Wyneck's studio that February night in 1938. It would not be long before others joined in and folk dancing was on its way as you already know. Referring to themselves as Changs Folk Dancers, they moved to larger quarters in the Green Lantern, a bar and restaurant, 740 Kearny Street. Here Virgil Morton, to be joined later by Grace Churcher Perryman, helped Chang with the teaching. They taught simple dances, suitable for beginners. Song supplied the equipment while dancers and spectators donated money for records. Their stay at the Green Lantern abruptly terminated the same year and Grace thinks it was due to the folk dancers thrifty ways. They didn't spend for drinks. Late in 1938 they moved to 415 Broadway and began to function as a club. One of the new members was Buzz Glass. Members now began to take turns doing various jobs. As there were still no dues, they sometimes passed the hat.
This History is the sole property of the Folk Dance Federation of California. This excerpt is published with the permission of the Folk Dance Federation of California, Inc. Copies of the entire book may be purchased.
Posted by jbrux at 2/01/1970 No comments: 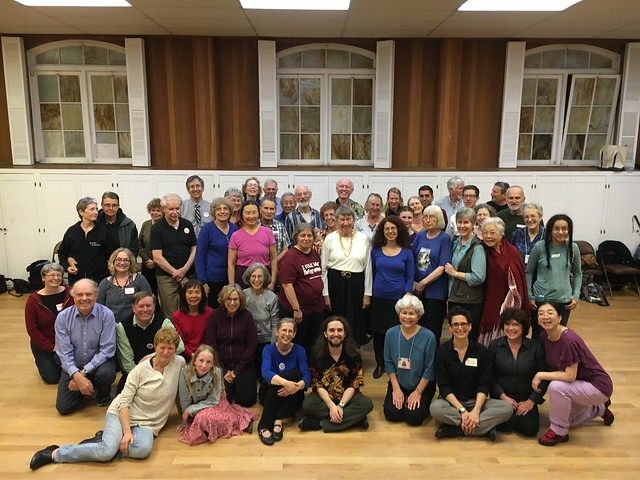